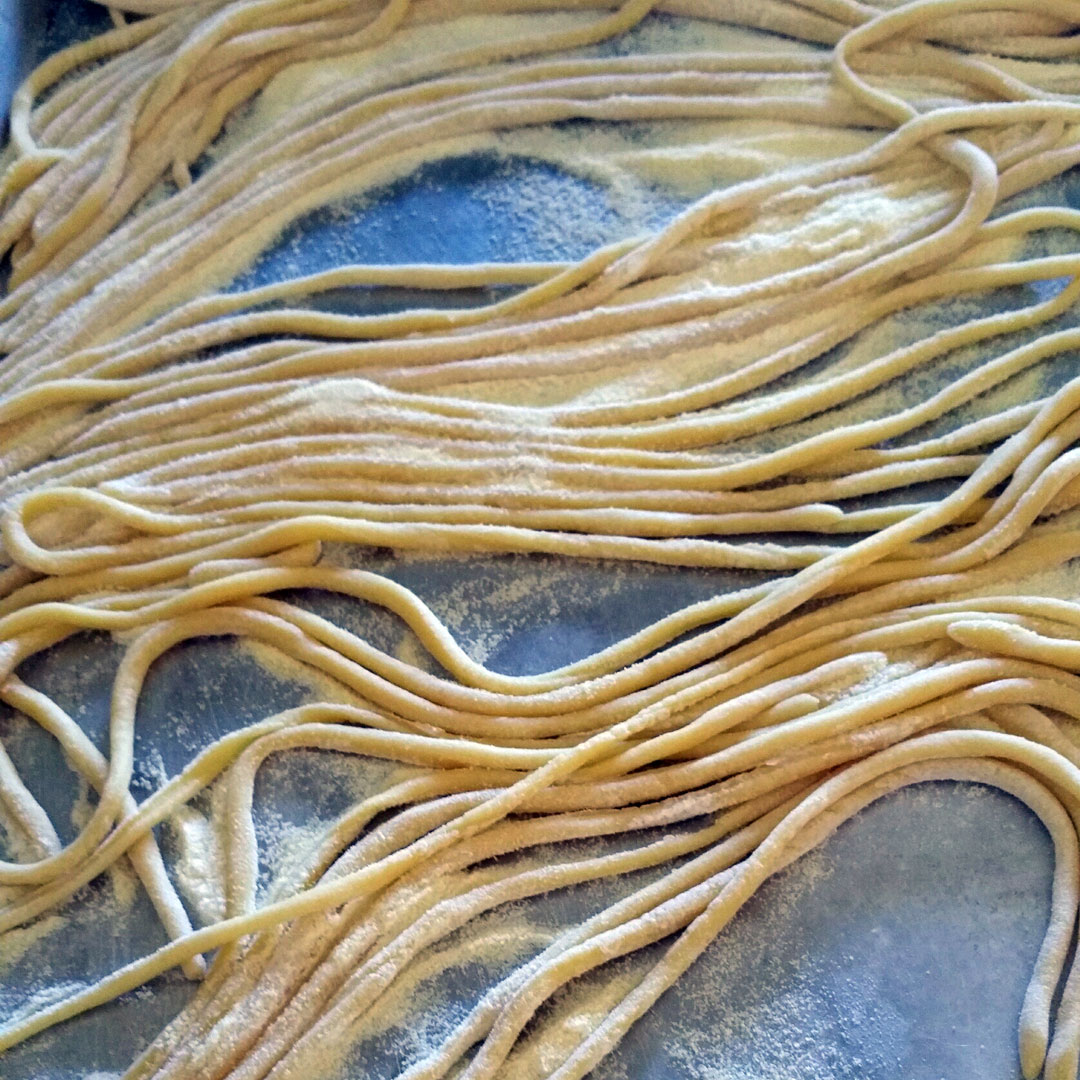 Pici pasta is a favorite of mine. When I see it on a menu, I order it. Pici is in a class of its own. It is fresh and chewy, and incredibly slurpable. Truth be told, I use this dough for my cavatelli as well, because of the chew factor.

When I was a kid, my grandparents would arrive on the day summer vacation began and stay until labor day. Some kids would come back from summer vacation, tanned, thin and 3 inches taller than they were when they left? Not this kid. My belly would be slightly rounder, I’d rattle off Italian phrases like I was Sophia Loren. I knew who Sophia Loren was. I was tan. We’d spend long evenings on the sun porch, eating, laughing, listening to the radio, and playing cards. My grandfather was an ace gin player and at a penny a point, we barely noticed our piggy bank dwindling. The food we ate was always delicious, and always from scratch.
Upon the gran’s arrival, the suitcases were hauled into the kitchen and unloaded. It was like Christmas. Literally. Grandma Grace would bring the Christmas stockings she collected from her bank and held from December until June. They were filled with hard candy and cheap toys; we loved them…and her for carrying on this tradition far longer than we really deserved. The grandmas were a tag team. Although they only saw each other this one time a year, they collaborated all year on what to bring with them to California. Out of the cases would come whole salami and prosciutto, buckets of polly-o and parmesan, capers, olives, anchovies. They were like traveling deli salesmen.
We didn’t think it odd at all.
Around day two or three the pasta making began in earnest. The dining room table, the pool table, the kitchen table, were all covered in sheets and dusted with flour. The pasta roller was brought down from the high shelf in the service porch and everyone was enlisted in the task of making pasta. We had one shot at making enough pasta for the summer. Mapping out how many dinners, who would be visiting, how much would each person eat, and what type and shape of pasta was a bit of an ordeal. The kitchen a bustle, until pasta making began. The room became silent. Everyone with a task; everyone working toward a common goal.
My job was always to transfer the pasta from the kitchen to its assigned table. Sometimes, most times, more went into my mouth than on the table. yes raw. Especially if it was cavatelli. I just loved the chew.
Still do.
Which is why I love this recipe. It has that bit of a chew. It also has a raw egg, so eating it uncooked is a risk you have to decide about on your own.

Place 00 flour, semolina flour and salt in a large bowl. Mix to combine. Make a large well in the center of the flour and fill with egg, olive oil, and 1/2 cup water. Using a fork mix together until all flour is moistened and the mixture is coming together. Use your hands to get the dough together in a ball. Turn out onto a floured work surface and knead for approximately 10 minutes. The dough should not be wet, and it shouldn’t be scraggy, but it should be a bit stiff. If the dough is too wet, use a bit of flour when you knead…just a bit at a time.
Wrap in plastic wrap and place in the refrigerator for about 1 hour.

To roll out the pici:
Roll the dough with a rolling pin, on a lightly floured surface to about 1/4″ thick. Using a knife, cut the dough into strips about 1/8″ wide. Gently roll each piece, on a lightly floured surface, starting from the center and work your way out. Place on a tray dusted with semolina flour.
Cook in a large pot of salted boiling water for about 8-10 minutes. Serve with your favorite ragu.
** pici pasta is not spaghetti. it is thicker and a bit denser. As I said before, it has a bit of a chew to it.