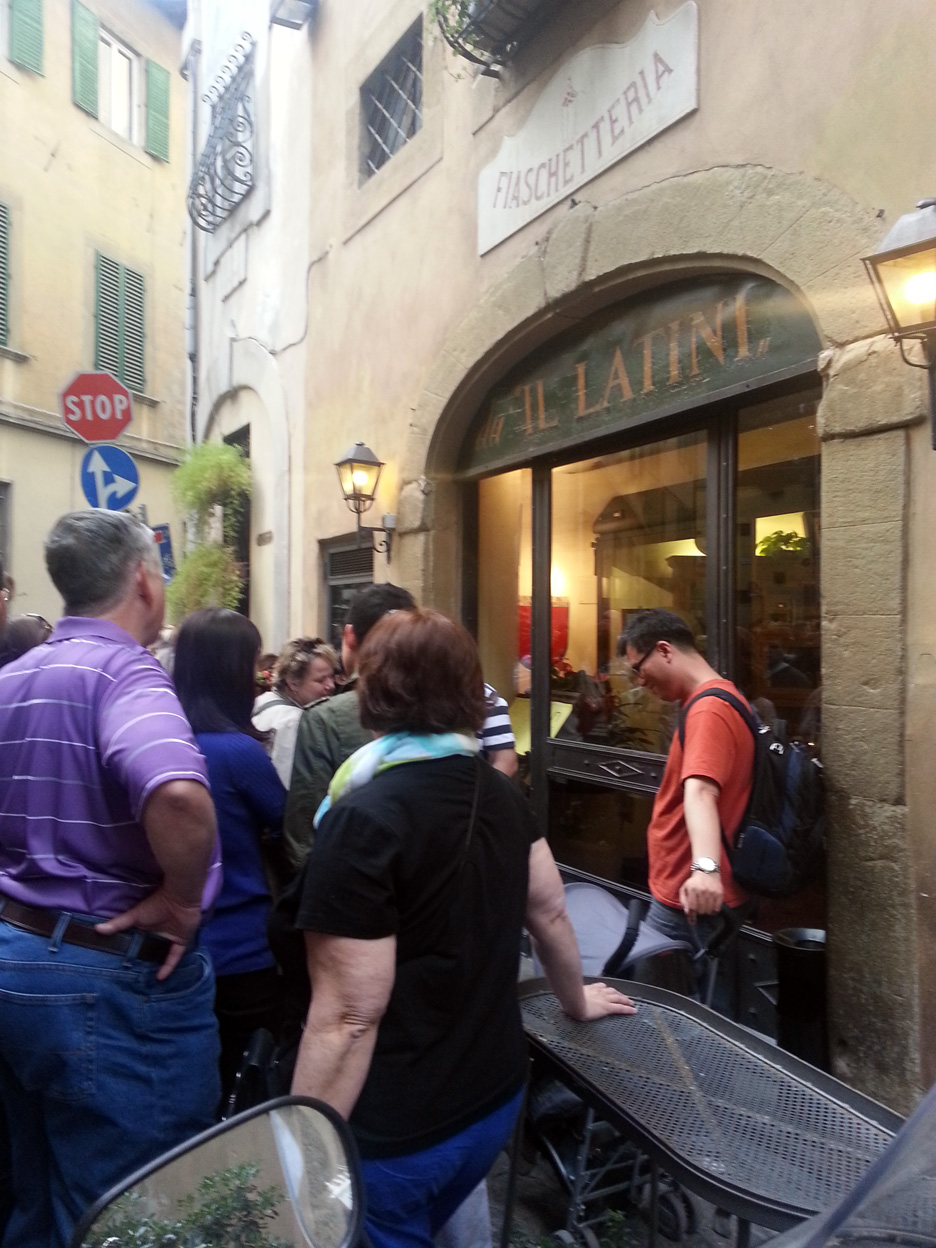 Day three is usually when jet lag hits. At least for me. After so many years of it being a pattern, it is probably now a learned response. Or maybe, I allow myself to succumb to it. Likely because, it is something I can say to people
and they won’t judge. Which is how we found ourselves giving rip van winkle a run for his money. After a long sleep, a long walk seemed in order. We cruised the streets of Florence until it seemed a respectable time to look for lunch. I was craving roasted chicken and potatoes. We found it on the menu of a place that looked really nice. Except they were playing Sade and I can’t stand Sade.Really, I can’t. No specific reason, just can’t tolerate her music. Reminds me too much of jazz, i think. I like a hook. Sade doesn’t give you a hook, so i refused to go in. Instead, I convinced myself that another place would be just as good.
I was wrong
Not even photo worthy. I will admit, Mike liked his. He got some sort of pasta and I ordered chicken with roasted potatoes. I was served, seriously, seriously, seriously overcooked anorexic chicken thigh-slash-leg, and french fries / I poked at it. At least I still had room for gelato.
But let me get ahead of myself here, don’t despair.

I had a bad meal in Italy, no biggie. I made up for it at dinner, and then some. We ate at a fun place. When i say fun, i mean…bring your sense of fun…because if you bring your >em>”that would never go in america” attitude, you.will. hate. this place, and they will hate you. So don’t go. If you still insist on going, don’t tell them i told you to, because I happen to like these people.

You must make a reservation at Il Latini, a restaurant that looks small but it isn’t. You make a reservation and queue up. Then the crowd starts building. Then the fervor starts building. Everyone starts thinking that their reservation is the most important.They open the door and it becomes a bit of a fiasco. They start calling out numbers, not names, but numbers. due, cinque, due, tre. Everyone starts pushing and throwing up their hands saying we are due, we are cinque, but mostly; they start yelling “I have a reservation.” Rest assured, everyone has a reservation and everyone gets in. And all the stress of getting in, is forgotten, when the food starts arriving. First the antipasto. Then you make choices: soup or pasta. Pasta? Do you want: ravioli, gnocchi, pappardelle, or spaghetti? Or perhaps all of them. Hubs chose ravioli, and I chose soup. did i mention that at this place they open a bottle of wine, and you pay for what you drink. Drink the whole bottle 10 euros. Drink only half, 5 euros. Drink less, pay less. I love this system.
The main course: roasted meats. You want chicken, rabbit, steak, lamb, pork, veal? All of them, some of them, one of them, none of them; you decide. And of course, the side dishes. This is what our table looked like. 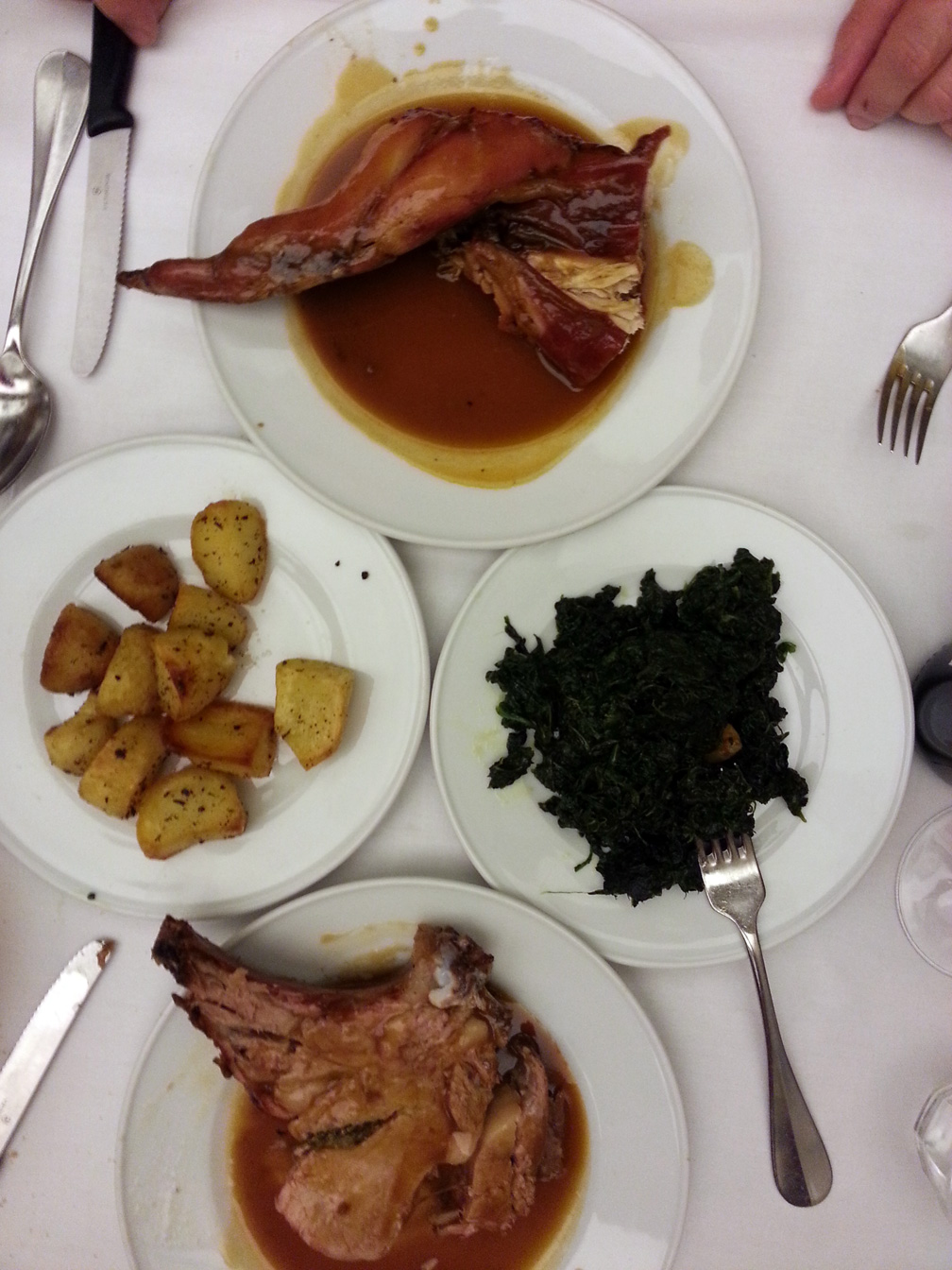 You should know, we cleaned our plates,but declined dessert. It was a good idea because, they brought out a plate loaded with cantucci and glasses of vin santo. Just as we thought it was all over they brought us a glass of moscato. You know,as you do. If you don’t know the drill
you think ahhh, they get you drunk so you aren’t freaked out by the bill. Because, come on, this kind of meal doesn’t come cheap.
Unless you are at il latini. They have reasonable in spades.